Before the Trentham Hall ice house in Holly Bank was constructed c1843, another ice house existed on the estate.

This year (2016) members of the Stoke on Trent Museum Archaeological Society have been excavating the remains of the ice house which is located on the west side of the lake.The ice house was built around 1723, the remains as they stand today show the outline of the ice chamber, being of brick construction and a corridor with what looks like evidence of an inner door.

It was probably originally covered with earth, but sometime later and additional structure was added making the corridor wider.  Also it looks like it had an apex roof of sorts as roofing tiles have been uncovered during the excavations and the bricks of the added structure are of a later date with the quality of the brickwork being somewhat inferior to that of the ice chamber.

The ice house is shown on Ordinance Survey maps for 1883 and 1890 but not on the 1900’s map although it isn’t known if this ice house was being used in the late 1800’s as the other ice house in Holly Bank was built around 1843.  The is a theory that the Holly Bank ice house was used to store meat slaughtered in the estate’s butchery which was near to Holly Bank.

The Stoke on Trent Museum Archaeological Society are hoping they will be allowed to carry out further excavation of the ice house in 2017, let’s hope so. 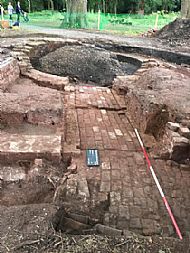 Trentham ice house No 2
The entrance to the ice house

Trentham ice house No 2
A side view of the site

Trentham ice house No 2
This item may have been used as a plug for the drainage system of the ice house.