Like many churches nowadays old graves are being laid flat or placed against a wall to satisfy health and safety concerns.   Some of these early gravestones make interesting reading.

The churchyard of St Giles at Newcastle in Staffordshire contains an interesting grave ‘marker’ in as much as it is made of cast iron and after a little research it has an interesting story.    The grave marker dates back to 1614 and measures 1.78m in length and .559m in width and reads:

Research has previously been carried out by Thomas Pape in 1919 and reported in the transactions of the North Staffordshire Field Club, (Vol 20 p41) and a further note in volume 89 in 1954.

John Smith, the Alderman mentioned on the tablet was a local ironmaster, he also served as the Mayor three times and it is more than likely the marker was made at his foundry at nearby Knutton.

It does not appear that cast iron grave marker were made for other members of John Smith’s family so this one is somewhat unique and therefore of local interest.
John Smith was buried in the chancel of St Giles, but the church went through some alterations in the 1870’s and the grave marker sold as scrap in 1884 to a local iron foundry, where it remained for some thirty years.   It was offered back to the Newcastle Town Clerk several times, but the offer was refused.

It then found its way to a corner recess in Hanley Park in Stoke on Trent but thankfully with help I’m sure from Thomas Pape back around 1919, the marker was eventually returned to St Giles Churchyard where it can be seen today. 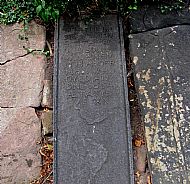