There was a hall at Dilhorne as early as the late 13th century with a replacement being built in and around 1377.

This hall was occupied by several families up to the late 18th century when it was inherited by a John Holliday who was a barrister at Lincolns Inn in London.

This John Holliday had the hall demolished and the third hall was built which was of Jacobean style with three stories.   The impressive lodge still stands today and gives you an idea of how Dilhorne Hall looked.

Several families occupied the hall over its time including the Buller family, they were also involved in the legal profession and in 1866 Edward Manningham Buller was given the Baronetcy of Dilhorne which is still in the Buller family to this day.

The hall had become vacant in the early 1920’s and it was offered for sale but it attracted no buyers and so it was demolished in 1927.

The ice house was probably built at the same time as when the third hall was constructed and is to the south of the present day recreation grounds which stands on the site of where the hall once stood and was cut out of a high solid sandstone bank.  The entrance is surround by ivy and the entrance doorway has ashlar blocks around it.  A wrought iron gate stands in place of what would have be a heavy wooden door.

The Dilhorne Recreation Centre (www.dilhorne-recreation-centre.com) held its annual open day in July 2016 and I was allowed to go inside the ice house.

In the corridor which is of carved sandstone, has evidence of it once having an inner door and on the right near to the ice chamber the is an alcove, again carded from the sandstone, which may have been used to store salt used to aid the ice making procedure.

Although electricity has been laid on it was difficult to see the bottom of the ice chamber due to thick condensation, but I could just make out the bottom and the drainage arrangement for when the ice melted which is of raised bricks in a cross formation.  The ice chamber has been carved out of the sandstone rather than being brick lined.  The only bricks in the ice house are those framing the doorway to the ice chamber. 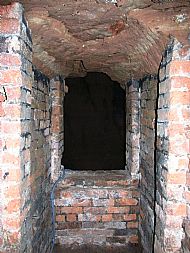