Thomas Meakin (or Meaykin) was born c1760 at Rushton Spencer to Thomas and Mary Meakin.  Around 1780 or so, Thomas junior move to the town of Stone where he found work in service as a groom, his master being an apothecary (pharmacist).

Thomas it seems caught the eye of his master’s daughter.  It is not known whether the attraction was reciprocated.   We do know however that in Thomas was taken seriously ill and sadly died and was buried in the churchyard of St Michael’s in Stone on the 16th July 1781

It would have been regarded as simply the sad death of a young man, but then we have the tale of a pony which had been in Thomas’s charge, making his way to Thomas’s grave and attempting to drag away the earth with his hooves.  This is supposedly to have happened more than once.

This naturally caused a lot of talk and suspicions amongst Thomas’s friends and no doubt the people of Stone, which must have continued for some time as almost to the year of his death his grave was exhumed and on opening the coffin Thomas’s body was found to be face down.

It was then believed that Thomas had taken – or been given a very powerful narcotic which did not kill him but gave the appearance of death.

His family and friends then had his body taken back to Rushton Spencer for re-interment in the churchyard of St Lawrence, but perhaps because of the circumstances he was laid to rest with his feet to the west as is his gravestone, in the believe  that his ghost would be laid to rest.

The Parish Register at Stone records state that “Thomas Meakin of Stone was buried July 16th 1781 and was removed thence and buried at Rushton Spencer July 17th, 1782.”

‘As a man falleth before

Wicked men, so fell I’

No charges were bought against anyone in connection of Thomas Meakin’s death. 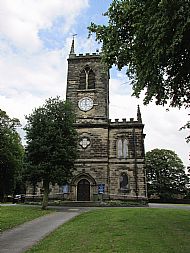 St Michael's Church, Stone
Part of the graveyard has been turned over to wild flowers

St Lawrence's Church, Rushton Spencer
No doubt there would have been a church service when Thomas was re-interred in the churchyard of this lovely church 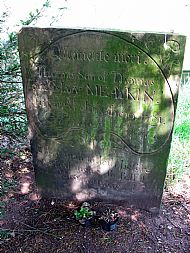 Thomas Meakin's Grave, St Lawrence's Rushton Spencer
This is Thomas Meakin's grave in the north part of the graveyard, facing to the west for his soul/ghost to rest.

St Lawrence's Churchyard, Rushton Spencer
St Lawrence's Church is known as 'The Chapel in the wilderness', this view explains why, it is situated high on a hill some distance away from the village and has some marvellous views. A peaceful final resting place for Thomas.